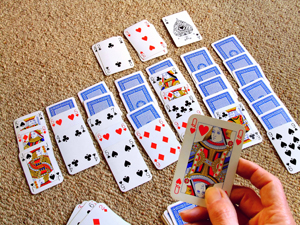 Here are some useful terms you need to know to play Solitaire.

.
Example of a complete ascending sequence of alternating colors: A

.
ascending suit sequence
Cards of the same suit are built in increasing rank. For example, a Jack

.
Example of a complete ascending suit sequence: A

base card
The first card in a sequence. A card turned up, or otherwise selected, to determine the foundations. The card at the bottom of a pile which is built on in a given order. In many solitaire games the Ace is specified as the base card; in others, the base card is a different predefined card or a choice of a base card is allowed.

column
A line of cards, one below the other, extending vertically on the screen.

can be played on the Jack

or on the Jack

.
Example of a complete descending sequence of alternating colors: K

descending suit sequence
Cards of the same suit are built in decreasing rank. For example, a 10

can be played on a Jack

fan
Three or four cards spread out and overlapping one another in the shape of a fan. Only the top-most card in the fan is completely visible; the other cards are partially hidden.
foundation
A pile to which cards are played in a certain sequence in order to complete the game. Foundations are usually built up in an ascending suit sequence from Ace to King.

King sequence
A packed sequence with a King at the top.

pair
Two cards of the same rank.
partial deck
An ordinary deck from which some cards have been removed.
pile
A batch of cards dealt upon each other and squared up in a compact heap.

rank
The face value or the number of an individual card. Each suit has 13 ranks consisting of 10 numerals (running from Ace (1) to 10) and three face cards (Jack, Queen and King). 5, 7, K are examples of a rank. A Jack of Clubs "ranks" higher than a 10 of Clubs.
ranking continuous
Means that Aces are in sequence both above the Kings and below the Twos. If the building is up, Aces may be built on Kings. If down, Kings may be built on Aces.
redeal
When all the cards have been discarded to the waste pile (once the stock has been exhausted) and no further moves are possible, if the rules allow, the waste pile is turned over, face down, and used as a new stock. Some games will allow one, two or three redeals and some will allow an unlimited number. Many games do not allow redeals.
reserve
A group of cards that is dealt at the start of the game and moved to a special part of the layout. Generally, the top-most card is available for play. Unlike the tableau, no building takes place on the reserve.
reversal
When two foundations of the same suit meet, the top cards being in sequence, any or all cards of one pile may be reversed upon the other as is advantageous, except the Ace or King at the bottom.
row
A line of cards, side by side, extending horizontally on the screen.

sequence
An entire built unit of cards of the same suit and in the correct order.
shuffle
To arrange the cards in a random order. SolSuite Solitaire has more than nine trillion predefined shuffles for each solitaire game, numbered from 0 to 9,999,999,999,999. Each game has a game number that identifies the shuffle starting position.
space
The spot occupied by a card on the tableau or in the reserve.
stock
The portion of the deck that remains at the start of the game after the layout has been dealt. These cards are normally face down. Cards are dealt from the stock, usually one at a time, when no further moves are possible.
stripped deck
A stripped deck is an ordinary deck with the 2, 3, 4, 5 and 6 of each suit discarded, leaving thirty-two cards. Ace is low and Seven follows Ace.
suit
There are four suits: Hearts

. Hearts and Diamonds are red suits - Clubs and Spades are black suits.
suite
A full set of 13 cards all of the same suit. For example: Ace

tableau
The main area of play, consisting of rows or columns, where cards are re-ordered according to the rules of the game and become available for transfer to the foundations.

waste (waste pile)
Cards dealt from the stock that cannot be played to the tableau or the foundations are placed, generally face up, in a waste pile. The top-most card is usually available for play until it is covered by the next discard.